February 27, 2015
When we are trying to find performance issues, it is sometimes necessary to do continuous recordings with Java Flight Recorder.

Usually we debug issues in an environment similar to a production setup. That means we don't have a desktop environment and we cannot use Java Mission Control for flight recording.

That also means we need to record & get dumps using command line in servers. We can of course use remote connection methods, but it's more easier to get recordings from the server.

With continuous recordings, we need to figure out how to get dumps. There are few options.

Note: The "jcmd" command is in $JAVA_HOME/bin. If you use the Oracle Java Installation script for Ubuntu, you can directly use "jcmd" without including  $JAVA_HOME/bin in $PATH.


To demonstrate, I will use WSO2 AS 5.2.1. First of all we need to enable Java Flight Recorder in WSO2 AS. Then we will configure it to start a default recording.


In VI editor, press SHIFT+G to go to the end of file. Add following lines in between "-Dfile.encoding=UTF8 \" and "org.wso2.carbon.bootstrap.Bootstrap $*"


As I mentioned in my previous blog post on Java Mission Control, we use the default recording option to start a "Continuous Recording". Please look at java command reference to see the meanings of each Flight Recorder option.

Please note that I'm using disk=true to write a continuous recording to the disk. I'm also using ./tmp directory as the repository, which is the temporary disk storage for JFR recordings.

It's also important to note that the default value of "maxage" is set to 15 minutes.

What really happens is that maxage threshold is checked only when a new recording chunk is created. We haven't specified the "maxchunksize" above and the default value of 12MB is used. It might take a considerable time to fill the data and trigger removal of chunks.

If you need infinite recordings, you can set maxage=0 to override the default value.


Let's use "jcmd" to get a Java Flight Recorder Dump. For this, I wrote a simple script (jfrdump)

You can see that I have used "JFR.dump" diagnostic command and the script expects the Java process ID as an argument.

I have also used the date for the recording name, which will help us to have multiple files with the date and time of the dump. Note that the recordings will be saved in the CARBON_HOME directory, which is the working directory for the Java process.


Since we have a working script to get a dump, we can use it as a task for Cron.


Now you should get a JFR dump every 15 minutes. I used 15 minutes as the maxage is 15 minutes. But you can adjust these values depending on your requirements.

Popular posts from this blog 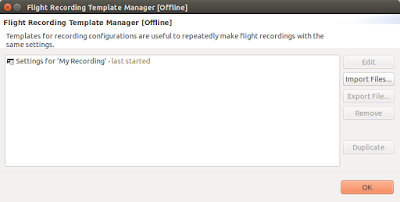 When you are using Java Flight Recorder (JFR), the JFR will use an event settings file to check which event types to record.
By default in JFR, there are two settings, "default" and "profile". The default setting is recommended for Continuous Recordings as it has very low overhead (typically less than 1% overhead). The profile setting has more events and useful when profiling the application.

Without this fix, it was not possible to see full stack in Java with Linux perf_events and standard JDK (without any patches). For more information, see Brendan's Java CPU Flame Graphs page.

The Problem with Java and Perf
First of all, let's see what's the problem with using current latest Java and perf.

For this example, I used the same program explained in my previous blog post regarding FlameGraphs.
java org.wso2.example.JavaThreadCPUUsage.App
Then I sampled on-CPU functions for Java program using perf. (See Brendan's Perf Examples)

These days I am analyzing some Java Flight Recordings from taken from WSO2 API Manager performance tests and I found out that main processing threads were in "BLOCKED" state in some situations.

The threads were mainly blocked due to "synchronized" methods in Java. Synchronizing the methods in a critical section of request processing causes bottlenecks and it has an impact on the throughput and overall latency.

Then I was thinking whether we could avoid synchronizing the whole method. The main problem with synchronized is that only one thread can run that critical section. When it comes to consumer/producer scenarios, we may need to give read access to data in some threads and write access to a thread to edit data exclusively. Java provides ReadWriteLock for these kinds of scenarios.

Java 8 provides another kind of lock named StampedLock. The StampedLock provides an alternative way to the standard ReadWriteLock and it also supports optimistic reads. I'm not goi…
Read more